Air ambulances became available to citizens in the 1970s; since then, they have become increasingly more common and important when saving someone’s life. 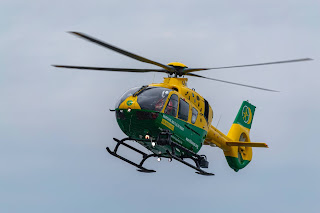 However, this life-saving innovation also brought greed along with it. Large privately-owned companies were able to decide the cost of the flight, no matter the case.

Since 2012, Texas Mutual Insurance along with the Attorney General and other insurance providers, fought against these large businesses to achieve a rate for air ambulances that is reasonable.

Large companies such as PHI Air Medical, naturally fought against the state of Texas to overturn a previously passed law that says PHI was to only receive fair and reasonable funds. Not the ones that they decide upon on their own.

"The issue has now been fully and fairly litigated," said Mary Nichols, senior vice president and general counsel for Texas Mutual. "Without regulation, air ambulances would drain tens of millions of dollars from the system and ultimately from Texas employers and injured workers. These rulings affirm the role of the states in regulating their own workers' compensation systems, as a matter of federalism and sound regulatory policy."

Safe to say, it was a good win for the great state of Texas.

Popular posts from this blog

Occupational Safety and Health Administration ( OSHA ) recently updated its  COVID-19 guidelines  to help employers navigate a world with vaccinated and unvaccinated employees. In its updated guidelines, OSHA has emphasized guidelines for non-healthcare-related industries that typically involve close-quartered contact for extended periods, such as retail, food-service, and other essential positions. OSHA has stated that fully vaccinated people do not need to take all of the precautions that unvaccinated employees must. The guidance focuses mainly on identifying those employees who are at-risk in the workplace and unvaccinated. Who are the at-risk workers? Those who have conditions that prevent them from having a full-immune response to vaccinations. Workers with disabilities; under the Americans with Disabilities Act (ADA), workers with disabilities may be entitled to accommodations to protect themselves from contracting COVID-19.  Those workers that cannot be protected from a vaccina
Read more

In a competitive job market where unemployment is low and turnover is rising, companies must ensure that they have the best working environment possible to attract and retain quality employees. The concept of a “good” workplace culture can vary from one company to another. If you were to ask every individual what makes a good workplace, you would receive a multitude of responses. The Importance of Culture It is important to have a workplace culture that allows people to enjoy coming to work. Think about yourself for a second, do you want to spend the bulk of your days in a place that you dread? The importance of workplace culture cannot be understated. In 2021, 94% of entrepreneurs and 88% of people searching for jobs say a healthy culture is crucial for success. They are not wrong either, as businesses with a high-scoring workplace culture attract high-level employees and even lead to a 33% revenue increase . Organizational culture It is not just the employees or job seekers emphasiz
Read more

Unemployment fraud is becoming a larger issue for Texas Workforce Commission (TWC). Even though most clients’ unemployment claims should now be filed through Integrity, we would recommend that you also monitor your company’s unemployment account. If you have not signed up for the UBS account (electronic access to your unemployment account), you should still receive notifications via mail. However, those who have signed up for electronic transmission of these documents should be regularly checking to ensure that you are not receiving fraudulent notices as well. If you have any fraudulent cases filed on your company’s unemployment account, please feel free to forward them to the Covenants HR Department to respond. You can email HR@covenantsvcs.com  Please be assured that we are diligently watching our account and disputing any fraudulent cases that we find. When we have a fraudulent claim, we will notify the employee impacted as well as the HR contact.  If you have any questions, pleas
Read more